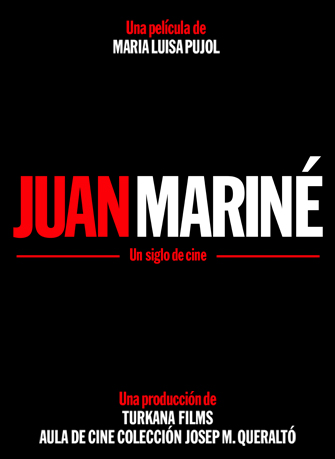 Juan Mariné. A century of cinema, is a documentary that stars Juan Mariné Bruguera, a man of cinema who turned one hundred years old on December 31, 2020, with a long professional career. He takes a tour through the different stages in which he has performed brilliantly: meritorious, camera assistant, second operator, director of photography, specialist in special effects, tricks and models, and film restorer. His longevity has also made him experience highly relevant historical events: the establishment of the Republic, the Spanish civil war, the Franco dictatorship, the democratic transition and now the health pandemic. But he has lived his true adventures making movies, dodging all kinds of situations and interacting with the most prominent directors, actors and technicians of several decades. The documentary is at the same time a tribute to Spanish cinema and its professionals.

The story of Juan Mariné has many attractions to arouse the interest of the viewer and that are revealed in the documentary. In the first place, his work as a cinematographer, for his participation in the most emblematic and popular films of Spanish cinema such as “La gran familia” (Fernando Palacios, 1962) or “La ciudad no es para me” (Pedro Lazaga, 1966 ) for more than five decades. Renowned artists who have marked an era have passed through the lens of his camera. The 140 films that he has made are dotted with numerous anecdotes, authentic adventures worthy of being told. He has also been a pioneer in introducing technological innovations such as making the first color film in “La gata” (1956) by Margarita Aleixandre and Rafael M. Torrecilla in Spain.

The exciting journey through the life of Juan Mariné includes a pause in his cinematographic activity to get into cinema advertising that he successfully made for a brief period in the mid-1970s. It was a job that provided him with significant financial advantages and more time to devote himself to one of his great passions: research and later film restoration.

Mariné’s great professionalism made the directors want to repeat with him. Such were the cases of José María Forqué (10 films), Antonio del Amo (13). Manuel Mur Oti (4), Pedro Lázaga (22), Pedro Masó (36, of which 5 as director) and Juan Piquer (7). Mariné explains anecdotes of some films by these directors, focusing on the Lázaga-Masó tandem that includes the highest-grossing films of the 60s in which actors of the moment participated, such as Concha Velasco, Emilio Gutiérrez Caba, José Luis López Vázquez, Alberto Closas, José Sacristán, Toni Leblanc, Julia Gutiérrez Caba, Gracita Morales, Rafaela Aparicio,  Florinda Chico, Sonia Bruno, Mónica Randall or Teresa Gimpera as well as music groups that made history in Spanish pop, media characters on television and radio, etc.

Logically speaking of Mariné and his prolific and extensive career, reference is also made to the history of Spanish cinema, which on many occasions has not been properly valued. Dozens of films that have forged a rich cinematography of various genres, but unknown to new generations, will be reviewed. The documentary is, therefore, a just vindication of the figure of Juan Mariné, for all that he has contributed to the seventh art, and to Spanish cinema. It is an essential re-visitation for new filmmakers and the general public to discover with different eyes the immense artistic talent that runs through the thousands of frames of the past.