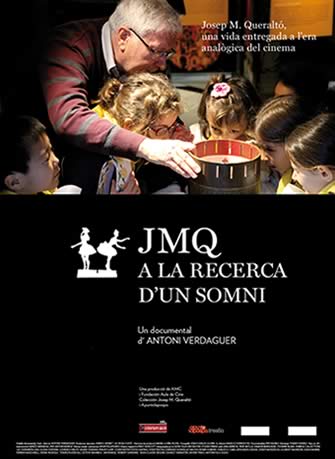 The documentary feature JMQ: a Quest for a Dream is first and foremost a journey through the life of Josep M. Queraltó, who from humble beginnings forged a successful career that by-and-by led him to become the owner of one of the most impressive private collections in the world of machines and objects related to the history of cinema and audiovisual production in general.

At the same time, this large and important collection of over 20,000 pieces, all properly restored and catalogued, takes us on an historical tour dating back to the birth of Chinese shadow play and continuing through the days of analogue cinema, with the Lumière brothers’ invention of the film camera – the cinematograph – and up to the appearance of digital age.

The documentary logically intertwines these two stories, over a structure of three distinct parts:

The first part explains the life story of Josep M. Queraltó, who began working as an assistant projectionist in the village of Vallbona de les Monges as a boy while he continued the traditional agricultural work of his family, and with virtually no schooling eventually created one of the most significant film production supplies companies in Spain, which in turn led him, almost by chance, to become a major collector.

This first part of the film highlights the willpower, perseverance and tenacity of a character who found a way to overcome all the obstacles in his path and live his dream.

The second and longest section of the documentary, which represents the core of the film, shows off some of the more interesting, valuable and fundamental items from the collection, and it does this by following the evolution of man’s desire to create moving images, from ancient Chinese shadow puppets through to pinhole cameras, magic lanterns, zoetropes, praxinoscopes, photographic ‘rifles’, and so on until Edison and the Lumière brothers and the days of the talkies, colour film, the various formats before and after 35 mm, and more. All this is told not only through fascinating footage of the machinery but also using fragments of some of the landmark films that have signposted or signified major changes in the history of cinema.

The third part, of similar duration to the first, speaks of the Dream referred to in the documentary’s title, which is to present all this material in a unique space open to the public to further purposes of history, culture and education, not only for Catalonia and Spain but also internationally, in respect of the importance of the collection and Josep M. Queraltó’s desire for it to become the basis of an interactive museum.